After qualifying 14th, Holmes battled his way to the front of the field and was running with the leaders. Then during his one and only pit-stop, the car located directly in front of the No.23 slid into his pit as Holmes was trying to leave, causing the Munford, AL native to leave his stall late.

This, along with a speeding penalty caused Holmes to restart the race from the back of the field with 65 laps remaining.

“We started the race well, but we had that miscue during our first stop, which put us in the back,” Holmes said. “I knew at that moment; it was up to me to get us back in contention.”

From there, Holmes began his march towards the front. Through the next 30 laps, he weaved through lesser cars and narrowly missed two wrecks getting back to the top 10 as the final laps dawned on the “World Center of Racing.”

“I was just having fun out there running through the field,” Holmes said. “I knew that we had a fast car and if I could just stay out of trouble I figured I could be in the right place towards the end of the race.”

Holmes positioning allowed him to be in contention for the lead with 20 laps to go, but after a massive wreck with just five laps left that damaged the SAFER Barrier on the front-stretch, the race was called leading to his sixth-place finishing position.

With that ending, Holmes won the coveted SCOTT Rookie of the Race award which goes out to the top finishing rookie in an ARCA event.

“I’m glad we won rookie of the race, but we know if we would have run those last few laps we could have won something even bigger,” Holmes said. “We just have to take this finish in stride and move on to Nashville. I think we will have something to show those other cars when we make it to the Fairgrounds Speedway in April.

Holmes now has seven top-10 finishes in his first eight ARCA Racing Series Presented by Menards events since his debut at Nashville in 2016. His previous highest finish on a superspeedway was ninth at Talladega last April.

The team now will take the No.23 Holmes II Excavation/Southern States Bank Chevy back to its shop in Statesville, N.C. and start game-planning for ARCA’s next event at Fairgrounds Speedway Nashville on April 8th. Holmes qualified 2nd and finished 5th in that event last season and will be looking for more this time as the team believes that this race could be its breakthrough to Victory Lane.

“We are very excited for that race,” Holmes said. “We had a great run last year, and I think we can improve on that, even more, this season. We have a great short track program, and I have a lot of experience at Nashville. This could be the race that we cement our names in as winners in ARCA.”

“Overall I just want to thank my team and all our supporters,” Holmes said. “We showed a lot of grit and determination this weekend. This will be a great year for BHR.”

About Bret Holmes Racing: Bret Holmes Racing is an Alabama-based ARCA racing team that operates out of Munford, AL and Statesville, N.C. while still holding true to its traditional southern roots. Founded by Stacy Holmes of Holmes II Excavation in Munford, we stick to our good nature and solid values to put the best product on and off the track with our driver Bret Holmes.

If you would like more information about Bret Holmes Racing, please contact Jason Katz at (334)868-9431 or email at jkatz@stu.jsu.edu. 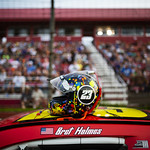 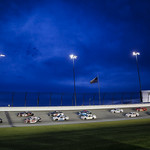