Bret Holmes and the No. 23 Holmes ll Excavation Chevrolet team finished ninth after leading laps in the ARCA Menards Series season-opener at Daytona International Speedway. Holmes started the 80-lap affair from the 19th position and quickly picked up the draft enroute to the front of the field. The Munford, Ala., native visited pit road under caution on lap 22 for fuel only and rejoined the racing surface in the 12th spot. After the ensuing restart, Holmes found a few drafting partners along the bottom groove of the racetrack. Just three laps later, Holmes maneuvered into the second position and set his sights on the leader. The 22-year-old driver made his move on lap 33 and assumed the lead. Holmes continued to lead until a caution slowed the field on lap 40 when crew chief Shane Huffman called his driver to pit road for fuel only. The No. 23 team restarted second and maintained position until Holmes was shuffled out of the draft in the final laps of the race and finished ninth.

BRET HOLMES QUOTE:
“It was a whirlwind of a day. After qualifying 19th, I feel like we picked our way through the field pretty quick. Shane (Huffman, crew chief) made the call to pit early for fuel, which allowed us to be in the front pack for the last half of the race. It’s a surreal experience to be able race at Daytona (International Speedway) let alone lead laps there. I’m a little disappointed and proud at the same time. I wish we could have come home with a win after leading laps. I know it’s a long time coming for everyone that supports this team, but we’re going to get that win soon. I can’t say enough about this team. I’m so proud of how far we’ve come, and how much we’ve grown. We’ll take this same car to Talladega (Superspeedway) this season and hopefully get a little redemption.” 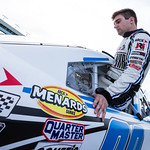 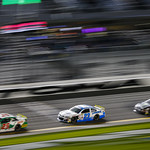